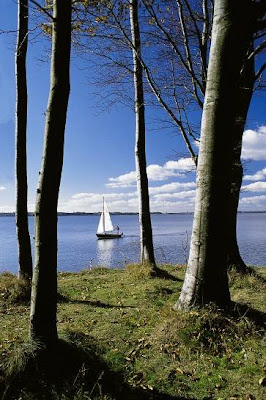 I'm taking a day off. See you Thursday!

Good for you Z,
We'll look forward to seeing you Thursday.

Meet Molly. She's a gray speckled pony who was abandoned by her owners when Katrina hit southern Louisiana, USA. She spent weeks on her own before finally being rescued and taken to a farm where abandoned animals were stockpiled. While there, she was attacked by a pit bull terrier, and almost died. Her gnawed right front leg became infected and her vet went to LSU for help. But LSU was overwhelmed, and this pony was a welfare case. You know how that goes.

But after surgeon Rustin Moore met Molly, he changed his mind. He saw how the pony was careful to lie down on different sides so she didn't seem to get sores, and how she allowed people to handle her. She protected her injured leg. She constantly shifted her weight, and didn't overload her good leg. She was a smart pony with a serious survival ethic.

Moore agreed to remove her leg below the knee and a temporary artificial limb was built. Molly walked out of the clinic and her story really begins there.

'This was the right horse and the right owner,' Moore insists. Molly happened to be a one-in-a-million patient. She's tough as nails, but sweet, and she was willing to cope with pain. She made it obvious she understood (that) she was in trouble. The other important factor, according to Moore, is having a truly committed and compliant owner who is dedicated to providing the daily care required over the lifetime of the horse.

Molly's story turns into a parable for life in post-Katrina Louisiana. The little pony gained weight, her mane felt a comb. A human prosthesis designer built her a leg.

The prosthetic has given Molly a whole new life, Allison Barca DVM, Molly's regular vet, reports. And she asks for it! She will put her little limb out, and come to you and let you know that she wants you to put it on. Sometimes she wants you to take it off too.' And sometimes, Molly gets away from Barca. 'It can be pretty bad when you can't catch a three-legged horse', she laughs.

Most important of all, Molly has a job now. Kay, the rescue farm owner, started taking Molly to shelters, hospitals, nursing homes, rehabilitation centers. Anywhere she thought that people needed hope. Wherever Molly went, she showed people her pluck. She inspired people. And she had a good time doing it.

'It's obvious to me that Molly had a bigger role to play in life', Moore said, 'She survived the hurricane, she survived a horrible injury, and now she is giving hope to others.' “she's not back to normal,' Barca concluded, 'but she's going to be better. To me, she could be a symbol for New Orleans itself.'

Molly's most recent prosthesis has a smiley face embossed in it. Wherever Molly goes, she leaves a smiley hoof print behind!

Submitted by FreeThinke, who wishes you could see the pictures that accompanied this story when it appeared in my inbox a short while ago.

it's sometimes needed - as for me, my in-laws are here so i won't be relaxing for another eight days!

Isn't any GLAD that Obama was defeated in West Virginia by a TWO-THIRDS margin? Or has WV ceased to have any significance in our nation?

Nice picture, it had a certain "zen" quality.

West Virginia is the state full of Democrats that keep sending Klansman Robert Byrd back to the Senate. In that regard, West Virginia Democrats are the most ideologically pure.

Obama could promise to surrender to Osama Bin Laden himself or raise taxes to the point everyone is unemployed or any other promise right up a Democrat's fantasy list and Democrats in West Virginia still wouldn't vote for him because of his skin color.

If that's true, Beamish, how come Obama won so handily in North Carolina and hasn't been rejected by ALL the southern states? Is it the influx of all the Damn Yankees who've invaded the Land of Cotton?

I don't think "skin color" is important, unless it's attached to the kind of behavior, taste and speech patterns exemplified by Sharpton, Jackass, the Rap-Crap crowd, and others who suffer from The Ebonic Plague.

I'm pretty sure you know what I mean.

Bobby Byrd is now ANCIENT. He claims to have given up all that KKK stuff a long time ago, as did Strom Thurmond, who was a segregationist, when he was a D'Rat, but never was a member of the Klan (I don't think).

I think they support Bobby in WV because he brings home more pork than any other member of the senate.

Personally, I've always found Bobby to be obnoxious. His body language when he's on camera in the senate kinda makes you want to bust him one in the chops. C-Span televises everything in both houses gavel to gavel. The pace is less exciting than watching grass grow, but you can learn a lot about the turkey's and low-flying chicken hawks who determine our fate every day they are in session.

Has anyone seen Aphrodite? or

Can we come, too?

We all need a break from Obama/Clinton and the Democratic National Communists.

If that's true, Beamish, how come Obama won so handily in North Carolina and hasn't been rejected by ALL the southern states? Is it the influx of all the Damn Yankees who've invaded the Land of Cotton?

too bad ya couldnt come shop with me..LOL

Thanks, everyone! I did feel a bit less frenetic today. I LOVE doing the blog and I love all of you coming by SO much...but I just had HAD it Tuesday night and decided to take a day.
Angel did, too (wish I could have shopped with you, girl!), and nanc says there's a blog funk going around. I guess I caught it?

HOW MUCH OBAMA CAN WE HEAR ABOUT, right?!

Just want to make it TWENTY comments. Even numbers seem so much more restful and stable than odd ones, I think.

"Freedom is never more than one generation away from
extinction. We didn't pass it to our children in the bloodstream. It must be
fought for, protected, and handed on for them to do the same, or one day we
will spend our sunset years telling our children and our children's children what
it was once like in the United States where men were
free." -- Ronald Reagan


Mac 'n GeeeZ is my food blog...enjoy! Sorry I haven't added to it in a long while.

President Obama has done such a horrible job with the economy and foreign policy that now Kenyans are accusing him of being born in the United States :-)

We are surrounded by IDIOTS...Mr. Z

“Barack Obama's political genius is his ability to say things that will sound good to people who have not followed the issues in any detail —regardless of how obviously fraudulent what he says may be to those who have. Shameless effrontery can be a huge political asset, especially if uninformed voters outnumber those who are informed.” Thomas Sowell.........AMEN

Tolerance is the last virtue of a dying society. (doesn't matter who wrote it, it's true and it's here)

The modern definition of 'racist' is someone who is winning an argument with a liberal.... Peter Brimelow

The difference between golf and government is that in golf you can't improve your lie. ~George Deukmejian

I have the greatest readers/commenters on the planet, and I encourage all to engage with us all and enjoy! I ask for respect for them as well as for myself. No gratuitous profanity. Friends can get away with more than people who insult me or my readers, and will, trust me.
You will be deleted for whatever I find delete-provoking. It's my house.
No Christianity or Judaism bashing
Enlighten, complain, or challenge, but keep it succinct. And please don't whine if you don't follow the rules and you're deleted. Thanks!
I advise all patrons that they are individually responsible for unlawful, harassing, libelous, abusive, threatening, or harmful material of any kind or nature posted through respective ISPs.

I hereby advise all readers against transmitting via comments, or links to other sites, any material that may constitute criminal behavior, or give rise to civil liability, including (but not limited to) violation of local or state laws, United States Code or regulation, or any international statute to which the United States is a signatory.

Z and the best team any blogger could ask for:
Elmer's Brother
Pris
Mustang