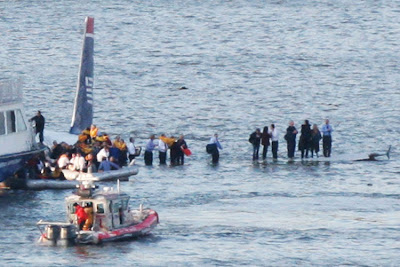 .....and you're not going to go one second before He's ready for you to go! The passengers on this plane sure could have lost their lives today.

"New York's Mayor Michael Bloomberg, an experienced pilot, said it appeared the pilot did "a masterful job of landing the plane in the river and then making sure everybody got out." And Gov. David Patterson pronounced it "a miracle on the Hudson."

That pilot and the rescue people are such heroes. Hooray for a good news story in a world of bad news.

amazing! my daughter called me to tell me about this earlier. she's been working in NYC for her xmas break. thank god everyone got out okay. yes yes! the pilot and rescuers are real heroes. god bless them!

The pilot-AFA grad-fighter pilot USAF- and on and on---Walked the plane twice to make sure all passengers were out-I want one of our Best of the Best to fly any plane I'm on :-)

My husband - USAF veteran - was not surprised at all that this excellent pilot was a former fighter pilot.

It was truly an amazing event. I'd like him as my pilot the next time I fly!

That is what we are really about.

z - that's the first thing I thought - walking on water - when I saw them on the wing.

What a shock that must have been for those poor people.

(Check that comment you made on my blog. I have a question.)

I hate to fly. Actually, it's not the flying part that I hate, but the possiblity of crashing. This is one of the most benign crashes I've ever seen. I still hate to fly ;-)

Thank God for the first responders. What an amazing story!

Heaven only knows why two engines were suddenly disabled by a passing flock of GEESE one minute after takeoff. Just goes to show that anything can happen anywhere anytime.


That plane was only in the air THREE MINUTES before it was forced to crash land.


The pilot and flight crew are to be praised to the skies (no pun intended), but even better are New York City's incredibly well-prepared, totally dedicated team of First Responders who were on the scene within two to three MINUTES.


It's amazing that no one was killed. I understand, however, that SEVENTY-EIGHT have been injured, and that ALL hit their heads on the ceiling as the plane hit the water with tremendous force.


A miracle that the pilot was so level-headed as to avoid crashing into the city streets. Can you imagine the horror had he done that?


Frankly, I think the greatest miracle of all is how PEOPLE seem almost ALWAYS to be at their BEST when a crisis hits --- the most notable exception being the Welfare Queens of New Orleans, their blundering Mayor Ray Nagin and that paragon of fine governance Kathleen Blanco, then-Governess of Louisiana.


Of course New York is my home town. I am so very glad this terrible occasion has given me cause once again to be proud of New York --- The New York Times, Columbia University, NYU and Mayor Bloomberg notwithstanding.


The rank and file there may seem gruff to outsiders, but they are incredibly savvy and for the most part have hearts of gold.


Thank GOD that everyone escaped with their lives intact. We should all pray for the speedy recovery of those who were injured.


QUESTION: How in Heaven's Name did they all get OFF a plane that was half submerged in 40º water and apparently sinking fast --- in 10º weather yet?

WHAT a rescue, what a pilot...what a group of people; all helping each other.

You think they'll be asking for NO MORE AIRPLANES IN THE SKY because BIRDS ARE BEING KILLED?

I was just wondering!

What a story! Wonderful.

Only you would think of PETA, Z.

Tom? Am I nuts or do you have a no-comment blog now? Am I missing something!? Thanks for coming by...

The pilot was a Air Force veteran and a very seasoned commercial pilot.

I guess experience DOES matter... 145 days behind the stick and this could've ended much differently...

yes I almost had to go to the scene Z..but thank God everyone was alright!!!

cube - I generally don't worry about crashing when I fly but am uneasy about takeoffs, landings and sudden movement while in the air. I don't mind flying but I have a trip the the last week of February and am a little uneasy about the weather - like ice on the wings.

Plane crashes in the water like the one today - especially in cold water - are upsetting to me. Do you remember when the plane crashed into a bridge in Washington D.C. in January of 1982 and 78 people were killed. The wings had not be properly de-iced. A few became heroes from that.

A friend of mine's about 50 now and I believe his Dad was killed in a plane crash in water...I thought it was the Hudson River, but I could be wrong. He was killed before Dave was born. Horrible story......

Sue..flight attendants will tell you the ascent and descent are the times there could be trouble....I'm always relieved to have got past that period!!

Such a happy ending to what could have been so terrible. It's a wonderful story.

The survivors on FOX all mentioned that everyone was praying on the plane.........
Yahoo's article this morning has managed to get tons of quotes and anecdotes about the experience but somehow no praying was mentioned.
I think that's sad.

The word "MIRACLE" has been removed from the lexicon on this event, too. And the experts yesterday were calling it just that.

How quickly we forget.

My own Air Force veteran husband said about the same as others here have stated, that this is good work and not out of the realm for a former Air Force Pilot.

Gee, and the guy is older, too.

Experience and maturity is a good thing.

Bloomberg just made a speech to the heroes of this near tragedy...who already got certificates just now..that was fast.

Bloomberg then made his speech in SPANISH? WHAT? "For those of you who don't understand English.."

The only GOOD thing is that more Hispanics will learn English just not to have to hear him speak Spanish again. MAN, is his accent DEPLORABLE! Not even an effort to speak it correctly! WOW! WHAT an accent!! HAA!!

Z - Click on the number below the date to leave a comment on the blog. It's a new template that I'm trying out, but people are getting confused on how to leave comments. The search continues...unless I break down and code one myself (I'll have lots of time in a while...)

By the way, don't give PETA any ideas. Look how Global Warming took off...

"Freedom is never more than one generation away from
extinction. We didn't pass it to our children in the bloodstream. It must be
fought for, protected, and handed on for them to do the same, or one day we
will spend our sunset years telling our children and our children's children what
it was once like in the United States where men were
free." -- Ronald Reagan

Mac 'n GeeeZ is my food blog...enjoy! Sorry I haven't added to it in a long while.

President Obama has done such a horrible job with the economy and foreign policy that now Kenyans are accusing him of being born in the United States :-)

We are surrounded by IDIOTS...Mr. Z

“Barack Obama's political genius is his ability to say things that will sound good to people who have not followed the issues in any detail —regardless of how obviously fraudulent what he says may be to those who have. Shameless effrontery can be a huge political asset, especially if uninformed voters outnumber those who are informed.” Thomas Sowell.........AMEN

Tolerance is the last virtue of a dying society. (doesn't matter who wrote it, it's true and it's here)

The modern definition of 'racist' is someone who is winning an argument with a liberal.... Peter Brimelow

The difference between golf and government is that in golf you can't improve your lie. ~George Deukmejian

I have the greatest readers/commenters on the planet, and I encourage all to engage with us all and enjoy! I ask for respect for them as well as for myself. No gratuitous profanity. Friends can get away with more than people who insult me or my readers, and will, trust me.
You will be deleted for whatever I find delete-provoking. It's my house.
No Christianity or Judaism bashing
Enlighten, complain, or challenge, but keep it succinct. And please don't whine if you don't follow the rules and you're deleted. Thanks!
I advise all patrons that they are individually responsible for unlawful, harassing, libelous, abusive, threatening, or harmful material of any kind or nature posted through respective ISPs.

I hereby advise all readers against transmitting via comments, or links to other sites, any material that may constitute criminal behavior, or give rise to civil liability, including (but not limited to) violation of local or state laws, United States Code or regulation, or any international statute to which the United States is a signatory.

Z and the best team any blogger could ask for:
Elmer's Brother
Pris
Mustang